The Boy Who Harnessed the Wind is an excellent movie about a 13 year old Malawian boy named William who is living in a village that is facing a famine. His deep burning desire pushes him to learn what he needs to in order to cobble together a wind powered generator that powers a pump and saves the village.

I just watched this the other night and although it is extremely rudimentary, its a great story about desire, innovation and spirit. Every young child has something to learn from this as it is a story of determination and commitment, which is obviously important for their character.

This story is based on a book of the same name and a young-reader’s edition is available here: The Boy Who Harnessed the Wind

It would make a great gift for any school-aged child.

The movie is a Netflix Original so is most likely only available from Netflix. The link to the movie is here: https://www.netflix.com/title/80200047

The cylindrical sails you see in the picture above go back 100 years and were invented by a German Engineered Anton Flettner are are based on the Magnus Effect.

The Magnus Effect is where air flow over a round object will have an uneven flow over the shape so that there is a faster flow on one side than the other and similar to the Bernoulli Effect that allows an airplane to fly, the Magnus Effect can produce an asymmetrical thrust.

Here is an animated Gif showing how it works:

For this effect to work on a ship, electricity is used to rotate these cylinders and as the wind blows past it, a unidirectional thrust is created that helps to propel the ship thereby reducing it’s fuel consumption.

Here is the claim: “The 240 metre-long Maersk tanker will be retrofitted with two modernised versions of the Flettner rotor that are 30 metres tall and five metres in diameter. In favourable wind conditions, each sail can produce the equivalent of 3MW of power using only 50kW of electricity. Norsepower expect to reduce average fuel consumption on typical global shipping routes by 7% to 10%, equivalent to about 1,000 tonnes of fuel a year.”

That’s not a misprint – 3 MEGA WATTS of power is created using only 50 KILOWATTS – that is a COP of 60 times or 6,000% gain compared to what the operators of the ship have to input. Of course, none of this violates any laws of physics since it is an open system and the wind is free environmental input, which is simply being leveraged from very little input.

Congratulations to Norsepower for being open about what it is able to accomplish and to Maersk for allowing this to be implemented on a tanker.

Mike Water’s wind turbine design can produce 12,000% MORE electricity compared to a standard 3 blade turbine of the same diameter. And, it can start generating electricity in less than 1 MPH. Check out this awesome looking transparent version created by one of the member’s of Energetic Forum!

You can learn more about this project, which is not yet complete here: http://www.energeticforum.com/renewable-energy/20549-12-000-more-open-system-physics-thermodynamics-mike-waters.html

Open System Physics & Thermodynamics by Mike Waters – If you want to learn an argument that wins 100% of the time against conventional physicists who deny “overunity”, this is for you. You’ll also learn how Michael produced 12,000% MORE electricity from the wind compared to a conventional turbine – it’s so simple, you can build your own test units to see what they produce! He also goes into graphene, cavitation and many other concepts including sharing his vision of a personal transport vehicle that could eventually have an unlimited range. Release date – August 5, 2016. Learn more: Open System Physics & Thermodynamics 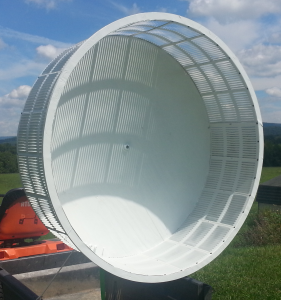 Mike Waters invented a very simple but profound wind generator method that uses 100% of the wind that hits it, which is huge compared to normal windmills that lets 97% go right through the blades!

Many tests have confirmed the validity of the concept and it works so well that it will generate electricity in less than 1 MPH wind.

Here are the main keypoints to this unique method:

So the MV Turbine technology design will:

For a recent presentation by Mike Waters, go here: https://emediapress.com/shop/open-system-thermodynamics/

It’s no secret that on a large scale, wind energy is not a viable solution as the maintenance is too high amongst countless other problems. It’s actually so bad that it would fail if it weren’t for the government subsidies to keep it floating.

Wind energy on a small scale is much more sensible, but even so, it isn’t that efficient. There is something called the Betz Limit that states that no wind turbine can capture more than 59.3% of the kinetic energy of the wind, but so far wind turbines only capture 30-40% of the wind.

There is a new wind technology that is blowing everything else away and it is 2.3 TIMES more efficient than blade technology and at a 45% reduction in cost.

Welcome to the Saphonian – a bladeless wind generator that takes the energy from the wind and uses it to pump up hydraulic accumulators. Watch it in action – this video is in French but you can see the obvious mechanism:

Visit their website to learn more about this revolutionary wind technology: http://www.saphonenergy.com/