In 1999, the first thing John Bedini showed me was his “Glass Case Motor”. It had dead batteries, he turned the shaft and it picked up speed while LEDs blinked and an old CRT monitor on his desk about 6 feet away had a picture that would shift with every rotation. While we can’t claim to have replicated the dead battery effect, we guarantee you will get the exact specs of the motor that he has demonstrated for decades that did this. We are still learning from it.

Many people have seen this including myself, Peter Lindemann, Paul Babcock and others. After the motor started on dead batteries, it picked up speed and at the end, the batteries were charged. We are still experimenting with what he could have done with the batteries but nevertheless, you will get the exact specs of the motor so you can duplicate it and see what you come up with.

At the 2015 Energy Science & Technology Conference, it was the first time John ever brought this motor out to the public and everyone was amazed by it. It’s a beautiful work of art, John ran it, he let everyone look as close as they wanted at it but not once did he ever tell anyone what the circuit actually was. It has been one of the biggest mysteries hidden in plain site for over 20 years.

After John’s untimely death in November 2016, many of his belongings went back to his family and we were not sure if we were ever going to see it again in order to figure out what it was.

Around March of this year (2020), we were fortunate enough to be reunited with it as his family was kind enough to invite us over. We meticulously examined the machine and measured every inch of it, wire resistance to calculate the length and with the coil geometry, the turns, the specs of every component including how the LEDs were wired up. We show the complete circuit, the relationship between the power coil and generator coil, how the magnets on the rotor were situated, and of course, how the batteries were hooked up.

All of this and more, including some of the original ideas that inspired John’s research is revealed in the presentation. You will get enough information to perfectly replicate the Glass Case Motor, which John actually named the “Gravity Wave Space Flux Motor”. Make sure to listen to Peter’s interview below and get a copy of this rare disclosure, which is another exclusive from A & P Electronic Media.

Includes a PDF document of the PowerPoint presentation. 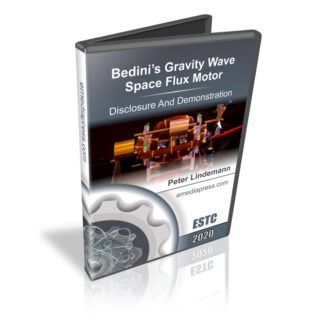