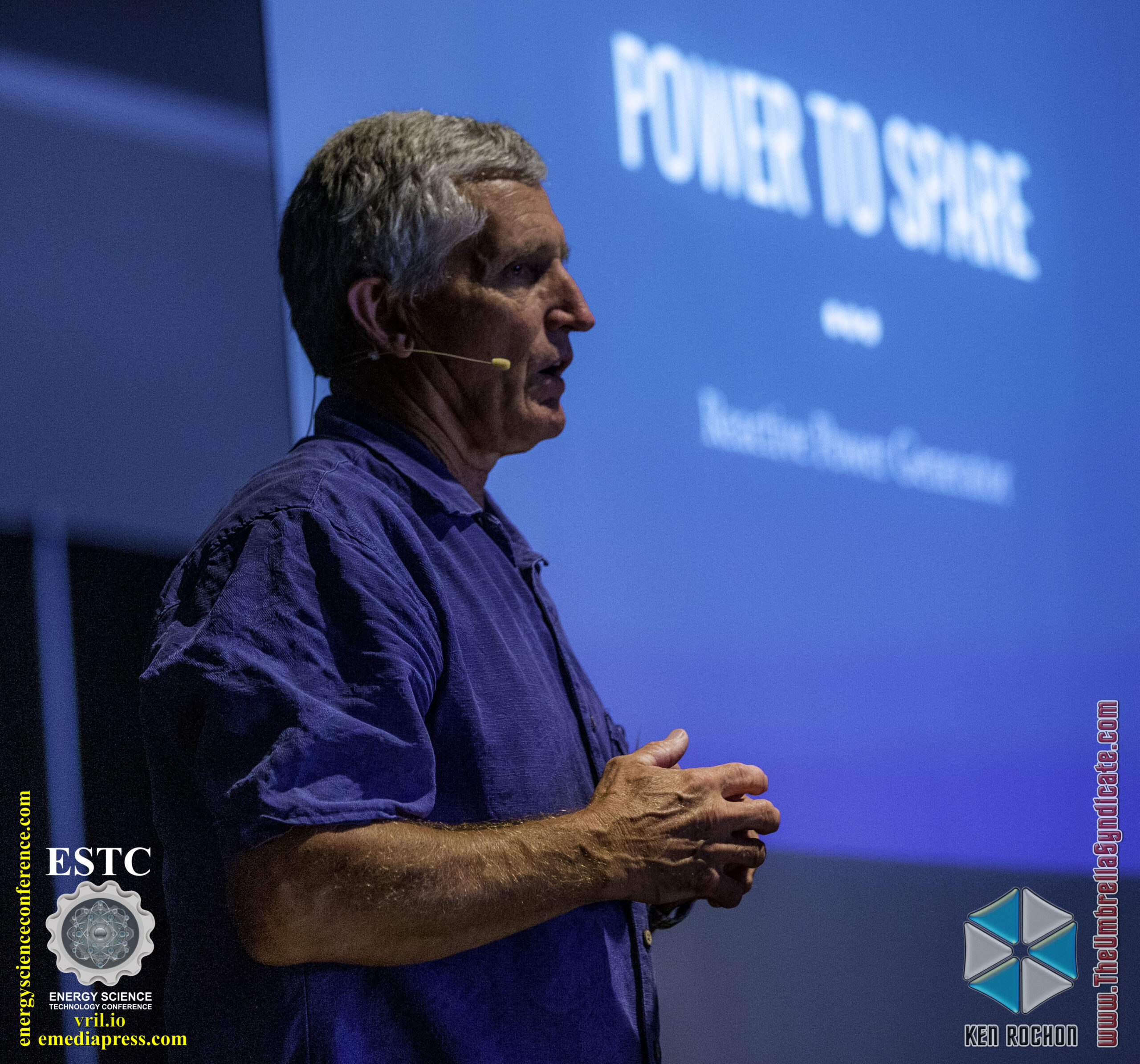 With consistency, Mike Clarke has brought his Reactive Power Generator (RPG) to a higher and higher level each year. Yes, with Paul Babcock and his partner Norm’s help, it will keep itself charged up while producing net power over time!

It runs on a battery bank, is similar to an air core Bedini SG but with a more sophisticated circuit, and charges a battery bank while BOTH banks STAY CHARGED UP… Everyone wants to see a self-running system – well, here it is.

Get a copy of this RPG Presentation now: https://emediapress.com/shop/reactive-power-generator-power-to-spare/

All the while… it is turning a generator that is doing net work by lighting a bulb or bulbs – the input battery bank not only seems to not care about the load, it’s like it doesn’t even know it is powering the prime mover!

Mike has presented on this a couple times already and this is the third time – each time gets better and better! The higher up in voltage he goes with the battery bank, the more efficient the system gets and he even shares one of the most crucial pieces of information – his battery swapping methodology – how he swaps the front and back batteries back and forth.

If you saw Paul Babcock’s presentation on Zero Entropy States, you’ll now see how that is applied in practice to keep some battery banks apparently indefinitely charged up – all by the nature of the RPG itself. Also, once again, John Bedini has been right all along.

Get a copy of this RPG Presentation now: https://emediapress.com/shop/reactive-power-generator-power-to-spare/ 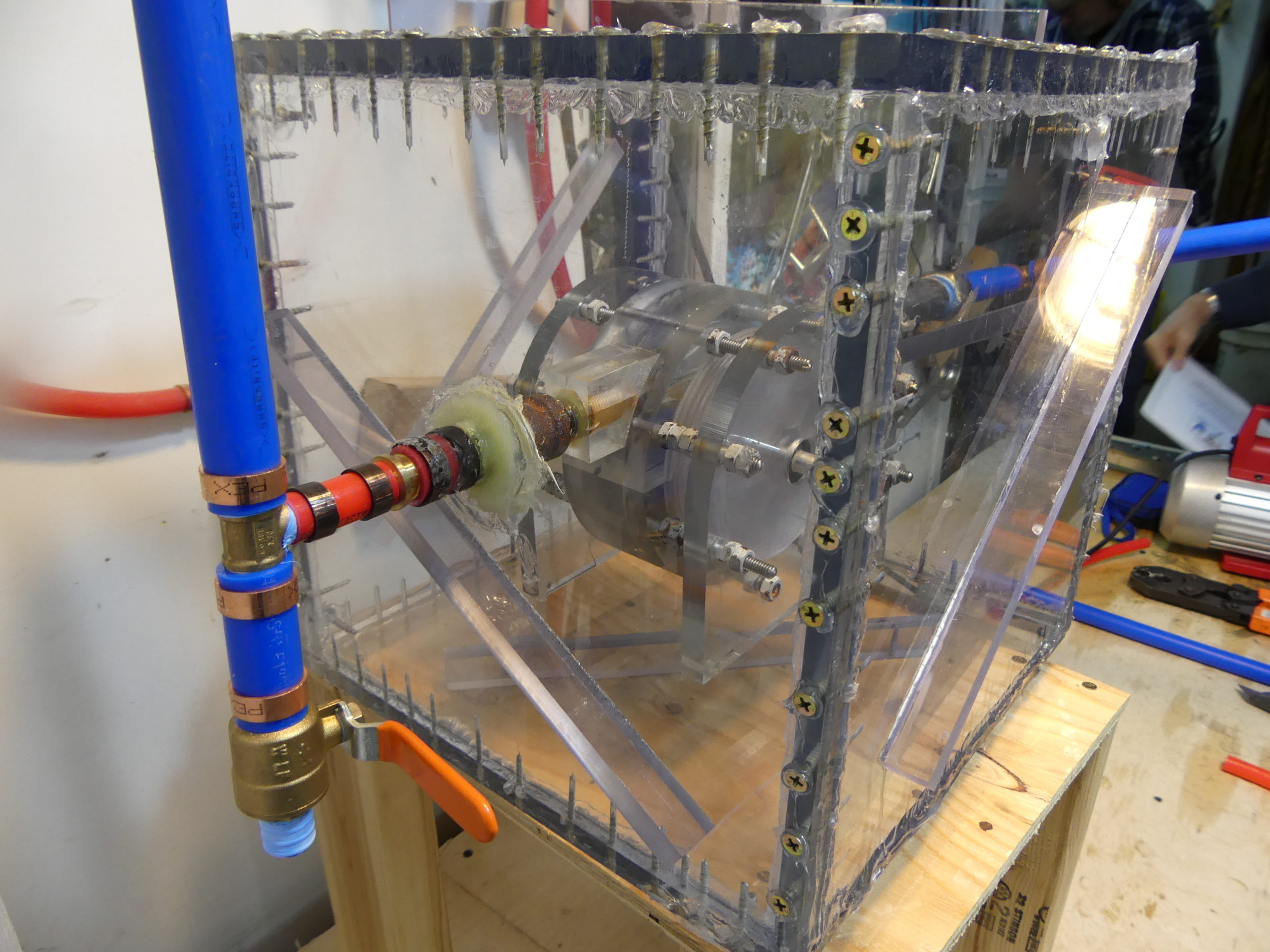 Cryophorus 2-Stage Tesla Turbine self-runs by creating it’s own vacuum to boil water in a warm tank at low temperature. This vapor pressure runs the first stage turbine, while the second stage maintains the vacuum. This runs in this self-running mode as long as there is enough warmth in the front side tank.

There will be more disclosed at the 2020 Energy Science & Technology Conference, which has not be revealed publicly yet with possibly other relevant demonstrations!

If you want a bit more insight, it’s recommended to get this book. Tesla’s Engine – there are only a handful of used copies left. When those are gone, they’re gone!

The 2020 ESTC is 1/3 sold out already, get your tickets while you can! http://energyscienceconference.com

This year, Peter demonstrated a method John Bedini used to keep a battery bank charged up while running his monopole motors. The method had been mentioned in the past in online forums, but nobody seemed interested enough to actually explore the reality to it.

I personally witnessed this method nearly 20 years ago at one of John’s shops affectionately nicknamed the “Palace” because of its interesting interior layout. Below is a picture of the EXACT machine that John Bedini accomplished this with. I also include a 12 minute video where I show you the machine in a video and give a basic explanation of the self-recharging process.

It was done most often with a plexiglass rotor where the coils were on both sides of the face of the rotor rather than at the circumference. It charged a large cap bank, which was then discharged to output bank. A battery was then shuttled back and forth between the front and back indefinitely without ever having to place them on a regular charger to charge them up since the machine and its setup accomplished this.

This demonstration unit that Peter showed kept its battery bank charged up all throughout the conference one one single charge. During the presentation, the monopole is running and he describes how the battery bank is arranged.

After all this time, John Bedini’s 3 Battery system or “Splitting the Positive” method is still making waves.

In 2016, Peter Lindemann presented on Bedini SG – Beyond the Advanced Handbook where he presented a larger scale Bedini SG with a 3 Battery rotation system that kept itself charged up all conference long. Learn more here: http://emediapress.com/2016/08/09/new-release-bedini-sg-beyond-the-advanced-handbook-by-peter-lindemann/

This year, RS Stafford presented a low budget low tech method of doing the same thing where he also demonstrated a battery bank that kept itself charged up while producing a lot of work. Learn more here: http://emediapress.com/2017/08/31/poor-mans-split-the-positive-battery-swapper-by-rs-stafford/

Matthew Jones and Dave (Turion) at Energetic Forum have been working on this concept for years starting with the “Tesla Switch” and related circuits and have put countless messages into the forum freely sharing their work with diagrams, videos, pictures and data. Others like Bob French, Wantomake and others have studied this work and have made incredible progress.

There are multiple threads over the years that cover this work, but make sure to check this thread out: http://www.energeticforum.com/renewable-energy/10610-3-battery-generating-system.html

You can go to the more recent posts over the last couple months (pay close attention to Wantomake’s posts and then go study this thread, which is closed and locked due to disruptions: http://www.energeticforum.com/renewable-energy/19774-basic-free-energy-device.html

And then study Matthew Jones’ videos on how to modify a scooter motor for the project: https://www.youtube.com/user/mjones7947/videos There are 8 relevant videos there so subscribe to his channel and give his videos a thumbs up to show your appreciation for his sharing!

If you don’t know where to start, grab a drink, put on your seatbelt and read both threads start to finish. It will take you hours, but how much is a self running system worth to you? It works, I know several people who have built this exact system (them) and someone that has even verified their work.

There is more to come, but that should keep you busy for a while. I hope you see the value in this and the implications of what it means.