View cart “Musical Seismograph” has been added to your cart.

Wireless Giant Of The Pacific

This book presents the historical and technical details that gave rise to the great transmission facility installed at Bolinas, California. The need for this book was seen in two particular presentations. One is the P.B.S. documentary “Empire Of The Air”, and the other is found in the Vril Compendium of Gerry Vassilatos. Concurrent with the writing of this book was his writing of Gerry’s book “Secrets of Cold War Technology.”

The people and equipment that gave rise to the Radio Corporation of America are detailed in my book. To the best of my knowledge, this is the first presentation of the electrical wave telegraphy which existed prior to what is now commonly known as radio. For the first time, the actual operating principles of the Tesla and Alexanderson systems are presented. This pushes aside nearly a century of disinformation and misconceptions.

The second book (by the same name) was written by local historian Dewey Livingston. It was commissioned by the National Park Service to verify and understand my own experience and understanding on this subject, as the inheritor of the facility from R.C.A. This writing was quickly to become suppressed and Mr. Livingston was threatened on the matter, halting any further development. At about the same time, my own efforts, in cooperation with Naval authorities, were abruptly halted. These events were directed by the malevolent forces who have destroyed all my efforts in Bolinas, and even leading to the death of one friend. The details are given in my paper, “The Bolinas Incident – The Barbara Boxer Report”.

The final two parts of this package are the basis for two presentations given at the San Francisco Tesla Society. Both were subsequently suppressed by that society. The morphology of this suppression is given in my paper, “Wardenclyffe Denied”.

The sudden release of my extensive writings on the Bolinas installation will come as a jolt to those who have worked to destroy this historic station and my life’s work. These vermin can be exposed to the Actinic Rays of the Truth. The purchase of these books will serve to intensify these rays.

WHAT YOU GET WITH WIRELESS GIANT OF THE PACIFIC 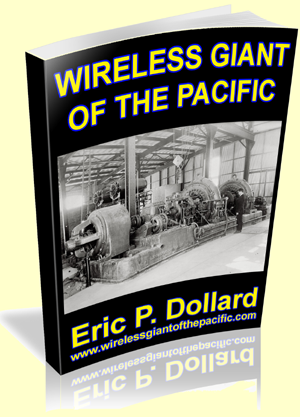